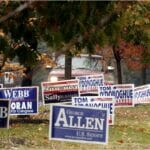 As we enter another election season, let’s tackle a frequently asked question: Can HOAs prohibit the posting of political signs? The answer: It depends.

In North Carolina, a prohibition on political signage in a planned community is allowed if the community’s declaration of covenants, conditions and restrictions were recorded prior to Oct. 1, 2005, and specifically prohibit “political signs,” or if the declarations of covenants, conditions and restrictions were recorded on or after Oct. 1, 2005, and give specific authority to restrict “political signs” by stating in bold, capital letters on the first page of the declaration, “THIS DOCUMENT REGULATES OR PROHIBITS THE DISPLAY OF POLITICAL SIGNS.”

If the governing documents were recorded after October 1, 2005, and do not contain the appropriate boldface language, or were recorded prior to that date but do not contain the specific restriction on “political signs,” then by law in North Carolina it is not permissible for an HOA to prohibit the indoor or outdoor display of political signs by an association member on property owned exclusively by that member.

North Carolina defines a “political” sign as one which “attempts to influence the outcome of an election, including supporting or opposing an issue on the election ballot.”

It may also regulate the size and number of political signs that may be placed on a member’s property if the association’s regulation is no more restrictive than any city, town or county ordinance that regulates the size and number of political signs on residential property. Charlotte’s city code of ordinances, for example, requires that signs cannot exceed 16 square feet in area, cannot be placed in a public right of way, and must be removed within seven days after the election for which they were made.

However, if the local government does not regulate the size and number of political signs on residential property, the association must permit at least one political sign with the maximum dimensions of 24 by 24 inches on a member’s property.

“Ask The Experts” Articles have been Reprinted with permission from the Charlotte Observer and Mike Hunter.

In the past, we felt like we did not get much support due to our size or the lack of effort from the person handling our account. I do not feel that way with Community Association Management. Our Property Manager has been very active in what we are trying to accomplish in our community and providing us with a variety of options. We are currently going through trying to figure out what to do about our roofing situation. The manager provided us good options and now we are in the process of startin… END_OF_DOCUMENT_TOKEN_TO_BE_REPLACED