Responding to a flier Hanson posted, other residents in his Blue Ridge Acres community began calling with similar experiences.  He learned a rash of 30 break-ins had occurred in the area within three months.

The existing crime watch group in this bedroom community wasn’t tracking the evolving problem, and differing law enforcement jurisdictions hadn’t connected the dots either.  Hanson, now president of Blue Ridge Acres Civic Association, which maintains 13 miles of private roads, hatched an idea:  Why not make real-time connections among members of communities who are rarely home?

That’s when Nation of Neighbors was born.  A web developer by profession, Hanson created this online crime watch site, which has in all likelihood, saved at least one life from domestic violence, while making 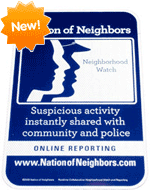 Its a new twist on an old solution – neighbors working together to stop, prevent or at least discourage crime.  Communities have many more tools at their disposal today to help fight crime.  Some of them are new, such as Facebook or Google groups, Twitter updates and text messaging.  Others are as low-tech as a notebook, a pen and a telephone list.  Many associations create awareness and rally volunteers by organizing social events, such as National Night Out, which was held on August 3rd of this year.

Community interest in a crime watch program is often triggered by a serious incident, such as rape or a series of burglaries, or smaller property crimes like slashed tires or garage break-ins.  Anxious residents in search of answers for crime – actual or anticipated – often wind up raising the issue at association board meetings.

How should board members respond?  Proactively and carefully, experts advise.  Most recommend boards invite police officers to speak to residents to share local statistics, suggest ways to prevent crime and guide residents how they can help police find “the bad guys”.

Making community improvements – such as improving lighting, changing landscaping or upgrading locks- is the board’s job.  Organizing community watches?  Many experts believe that it should be the purview of volunteers who are unaffiliated with the associations leaders, for practical and political reasons.  Liability concerns are one issue, but confusion of roles is another.

“I would not advise board members to inject themselves into the role of telling members how to set up a neighborhood watch.  The board cannot be the eyes and ears that the owners or neighbors can be,” says Beth A. Grimm, an attorney who is a member of CAI’s college of Community Association Lawyers (CCAL).

Grimm says she has attended many crime watch meetings where the conversations were about suspected drug activity – including methamphetamine labs – and neighborhood crime in general.  “I was there so that I could help the board understand its very limited role – purveyor of information and education,” she says.  Going beyond that can have significant liability implications, she says.

Indeed, Grimm knows board members who have become over-invested in crime watch activities.  In one case, a board member confronted people he did not know in the development, interjecting himself into what he thought was a drug deal.  “The police were called, and the board member was arrested for obstructing the officers,” she said.  The association board asked Grimm whether it had to pay the board member’s court and legal costs.  After examining the facts, she found it unnecessary for the association to pay.

The liability issue is paramount, agrees Raymond J. Diaz, an attorney from Falls Church, VA, and a CCAL member. “What’s the extent of the associations powers under the governing documents?  Does it have the power to establish a community watch?” Diaz asks.

If not, he says, associations that want to oversee the activities of a crime watch group first need to amend their governing documents and find out whether their insurance covers them.  “They must look to their insurance carrier to provide a statement in writing that the community watch committee members and functions are within the scope of the association’s liability policy,” he says.

From an insurer’s standpoint, community associations are not covered for crime watch activities under either general liability or directors and officers (D&O) liability.  If the association officially sanctions the group, the board should notify its insurance carrier beforehand.

There could be exclusions or ramifications depending upon what the clams are, If the organized watch activity is a stand-alone group that is independent of community association oversight, insurers need not be notified.  Board’s should also seek legal advice if they want to create an officially sanctioned crime watch initiative.

Neighbors who bypass police training and coordination with their watch activities can find themselves on the wrong side of the law – or worse.  Such was the case in a Salt Lake County, Utah community last year, when a self appointed patroller – carrying a gun with a concealed weapons permit – went out with his homeowners association president to be on the lookout.  They came across four teenage girls in a car that fit the description of a car used in a burglary.  The men confronted the girls; one went back and told her father they were being “stalked.”  Incensed, the father took his gun and found the patrolling men.  In the ensuing confrontation, the “on-patrol” homeowner was shot and paralyzed.  Ironically, the girl, her father and the self-appointed patrols all came from the same neighborhood.

While this tragedy contains some self-evident lessons – Rather than try to create your own Neighborhood watch or security protocol, always involve your own police department.  Police training about what can and cannot be done is crucial.  Generally, police departments welcome the opportunity to work with neighbors to prevent and solve crimes.

Launching a crime watch imitative requires no upfront investment.  Many cities and towns budget for signs that are posted notifying all who enter that a neighborhood is being watched.  More important than signs are committed volunteer leaders and neighbors willing to report suspicious or criminal activity to the appropriate authorities.

Association leaders might be wondering:  Is it worth it to introduce our residents to a crime watch program?  One review of 18 studies found that Neighborhood Watch programs were associated with at 16 percent reduction in crime.  That’s considered a “small favorable effect,” according to the analysis published in the Journal of Experimental Criminology in 2006.

If a community wants to do something, they have to do it.  If you have crime, you can’t go to the sheriff’s department and say, “It’s your fault, and you have to fix it.” you need to go to neighbors and say “Hey, its our fault and we have to fix it.”

Getting people to network with neighbors takes effort.  People are isolated, busy and preoccupied.  It is recommended that volunteer leaders work to identify and retain block captains.  Holding neighborhood parties so neighbors meet face-to-face is also essential.

Keeping up with crime is easier than ever, thanks to computer networks that provide crime statistics.  Many larger police departments have crime analysts who can keep neighborhood groups posted on the latest criminal activity in their neighborhood and Zip code.

Nation of Neighbors is a free service that operates along the same lines.  Today, this web tool is active with communities in 38 states and adds homeowners associations at the rate of two to three a day.  Communities can connect online and compare incidents and crime prevention ideas.

Most community watches start after a negative event in the community.  Everybody sees an immediate need, gets involved, then disbands when the threat seems to be gone.  This is different.  It helps keep those connections in place.  It’s an alert system that’s there the next time it’s needed.

View all posts by: ideaforge

“In the past, we felt like we did not get much support due to our size or the lack of effort from the person handling our account. I do not feel that way with Community Association Management. Our Property Manager has been very active in what we are trying to accomplish in our community and providing us with a variety of options. We are currently going through trying to figure out what to do about our roofing situation. The manager provided us good options and now we are in the process of starti… END_OF_DOCUMENT_TOKEN_TO_BE_REPLACED