How a Russian Gas Freeze Would Curtail European GDPs 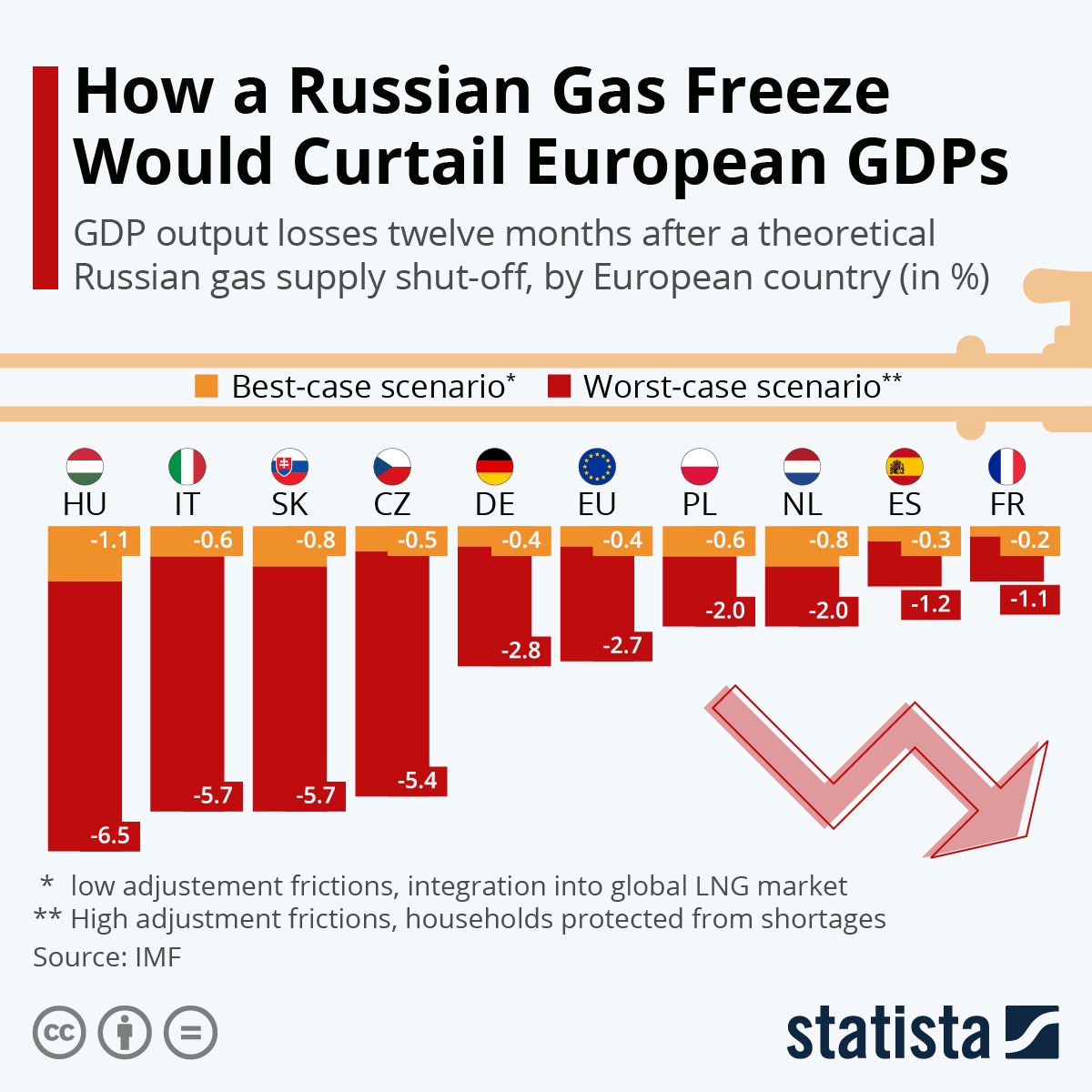 On the day that Germany is waiting for the Nord Stream 1 gas pipeline to resume deliveries after maintenance works, fears are mounting that on the other side of the line in Russian Vyborg; the tap will not be turned on again.

The EU is ready to release emergency plans to reduce gas demand today as curtails or even a complete freeze of Russian gas supplies is expected not just for Germany but the whole continent that is in large parts dependent on Russian pipeline gas. The target would be a 10-15 percent overall cut of gas use, according to Reuters. This would allow gas storage to be filled to capacity before a potential end of Russian supply.

According to the IMF, a complete shut-off from the Russian side would have disastrous effects for European economies. Twelve months after a total freeze, the organization estimates that some countries could lose several percentage points of GDP output. Some Central European countries – Hungary, the Czech Republic and Slovakia – as well as Italy, would be hit hardest. In a worst-case scenario where the continent does not achieve fast LNG integration, experiences many adjustment problems, and decides to protect private households, not just industries, from gas shortages, between five and six percentage points could be shaved off GDP output in these countries. Germany and Poland would fare slightly better at losses between two and three percentage points in this scenario.

As natural gas is used widely in Europe to supply heat and hot water in private homes, tensions have been running high over who should take priority in case of a pressing gas shortage in the coming winter.

Even for European countries which are not using Russian gas, spillover effects could mean up to 0.8 percent shaved off GDP should one of the IMF worse-case scenarios befall the continent. This includes the UK, Ireland, Portugal, Belgium and Croatia. As more and more countries are attempting a swift switch to LNG, problems of EU market integration could likewise mean losses for non-dependent countries. They could be about equal in size in the UK and Ireland and up to 2.2 percent in Croatia.

Author: Michael Mercurio, Esq.
Articles have been Reprinted with permission from the charlotte observer and Mike Hunter.

We were recently switched to Community Association Management with your buyout of Cline & Company. I wanted to take a moment to tell you how much of an asset our Portfolio Manager is to your company. The Manager made our transition from Cline Company seamless and the attention we receive from the Manager and your company in general is unmatched. Not to mention the tools and options made available to us. I think I can speak for myself, fellow board members, and also our community in saying that w… END_OF_DOCUMENT_TOKEN_TO_BE_REPLACED

In the past, we felt like we did not get much support due to our size or the lack of effort from the person handling our account. I do not feel that way with Community Association Management. Our Property Manager has been very active in what we are trying to accomplish in our community and providing us with a variety of options. We are currently going through trying to figure out what to do about our roofing situation. The manager provided us good options and now we are in the process of startin… END_OF_DOCUMENT_TOKEN_TO_BE_REPLACED